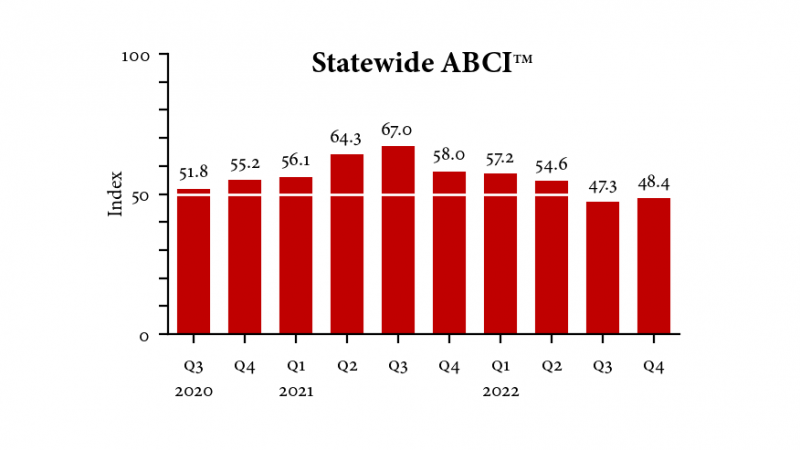 TUSCALOOSA, Ala. – For the second consecutive quarter, state business leaders have a negative outlook on the economy, according to the latest quarterly survey by The University of Alabama.

The UA Center for Business and Economic Research’s latest Alabama Business Confidence Index, taken in early September, remains slightly negative following a similar outlook in the snapshot taken over the summer, the first negative outlook for the economy since early 2013.

The Alabama Business Confidence Index was 48.4, up slightly from last quarter, and marks the first time the index hasn’t dropped in a year. An index over 50 indicates a positive forecast compared to the previous quarter, and the closer the number is to 100, the more confident the forecast.

ABCI is gathered from a broad group of business executives across the state with six key indicators and a composite index. The statewide and national forecasts, along with industry-specific components like sales, profits, hiring and capital expenditures comprise the six indexes that combine to make the ABCI total.

Panelists continue to be more negative about the U.S. economy than the state’s economy, registering a 34.6 confidence index nationally and a moderately negative 46.3 index for Alabama. Still, those were greater than indices from last quarter.

Earlier this year, CBER economists had predicted Alabama’s economy would grow about 3% in 2022, but have since revised that outlook to 1.8% growth.

The report also breaks down responses from nine industry groups surveyed. The healthcare and social assistance industry, in stark contrast to the last two quarters, had a positive outlook, registering a 50.6 index. In the past two quarters, this industry had the most negative outlook out of all sectors.

“Panelists in the industry are optimistic that they will have increased hiring, sales, and profits, indicating expectations for a rebound from their two quarters of depressed forecasts,” Robichaux said.

Firms of all sizes had mildly negative outlooks for their companies.

“Panelists in large firms are forecasting growth in all of the industry components, while small firms had a negative profits index counteracting their optimism for sales, hiring and capital expenditures,” Robichaux said. “Mid-sized firms are still anticipating increased hiring in the fourth quarter of 2022, but the rest of their component indexes were negative.”

In addition to the statewide ABCI report, CBER also collects ABCI data to write individual reports for Alabama metro areas. These metro reports offer insight into the forecasts for each specific region. Interestingly, the business leaders in Tuscaloosa are feeling most confident of the three metro areas represented in the latest survey that included Huntsville and Birmingham.