Preliminary Economic and Fiscal Impacts of the April 27, 2011 Tornadoes on Alabama 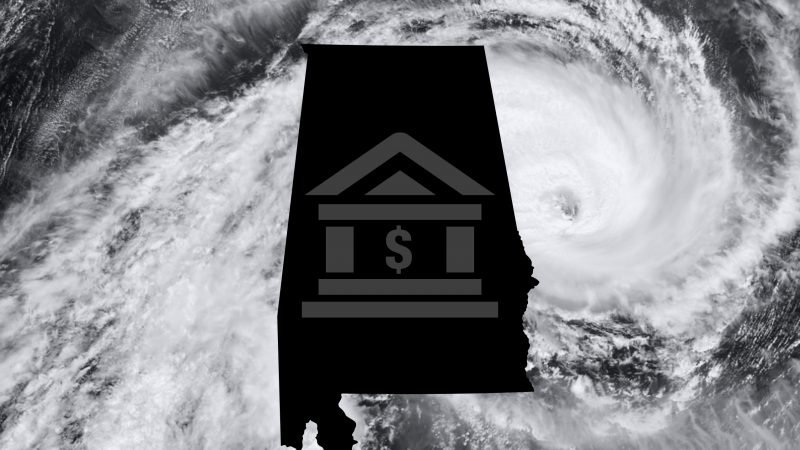 Preliminary Economic and Fiscal Impacts of the April 27, 2011 Tornadoes on Alabama

Center for Business and Economic Research

The University of Alabama

The state of Alabama was hit by dozens of tornadoes on April 27, 2011 mainly in central and northern parts of the state that resulted in 240 lives lost and more than 2,200 injured to date. The resulting damage was so severe that 43 of the state’s 67 counties have been declared federal disaster areas. Several communities had major damage and a few had almost complete devastation. Nearly 14,000 homes were either totally destroyed or have been declared uninhabitable. Within urban communities, Tuscaloosa County was one of the worst hit, where an EF-4 tornado with winds of over 190 mph cut a path six miles long and half a mile wide through the middle of the city, completely leveling numerous businesses and residential communities. It is still quite early to fully comprehend the total economic effects of the damage caused by the tornadoes. However, enough information is now available to permit some preliminary estimates of damage effects on the Alabama economy with specific focus on employment, earnings, state finances, and gross domestic product (GDP).

The purpose of this brief report is to present preliminary estimates of the economic and fiscal impacts of the tornadoes as well as the consequent recovery efforts on Alabama. Table 1 shows the preliminary impact analysis results. Multipliers obtained from the Regional Input-Output Modeling System (RIMS II), which was developed and is maintained by the U.S. Department of Commerce’s Bureau of Economic Analysis (BEA), were used in a model developed specifically for this analysis. To allow for uncertainty regarding the damage impacts at this early stage, low- and high-end estimates are presented. For impacts of recovery activities (cleanup, assistance, and rebuilding), multipliers used were for waste management and remediation services, accommodation, and construction industries.

State sales and income taxes are the largest components (constituting about 62 percent) of total state tax collections; residents and businesses pay a host of other taxes and fees. The combined income and sales tax revenues share of total state tax receipts was used to determine the total lost state tax revenue for the damage impact analysis because job losses occurred across many different industries. No such determination is made on the recovery impacts because of the focus on just three industries; only sales and income taxes are reported and as such the recovery fiscal impacts are conservative.

Toward the end of May 2011, ADIR had received 6,000 claims for tornado-related unemployment and had data showing that some claimants were returning to work. Adjusting this number of claims received for the eight months remaining in the year after the devastation yields an annual equivalent of 4,000 unemployed. Assuming that a quarter of the claimants will return to work gets the number down to 3,000 net direct unemployed wage and salary workers. To this number we add a 761 estimate for proprietors or self employed based on BEA data and determine that the total direct number of unemployed due to the tornadoes is 3,761 for 2011. It is expected that these people will be working again in 2012.

The 3,761 direct unemployed must be added to tornado-related indirect employment to determine a total employment impact. Since businesses in numerous industries suffered the damages, it is improper to apply specific industry multipliers when that information is not currently available. Most Alabama industries’ direct effect employment multipliers are between 1.5 and 3.5 and so we used these multipliers to determine that the total direct and indirect number of tornadorelated unemployed is between 5,641 and 13,162. This is about 0.2-0.5 percent of total employment including proprietors. Average earnings for workers in 2011 are not much different from the 2009 earnings per worker level of $38,621, which means that $217.9-508.3 million in total earnings will be lost in 2011 because of the tornadoes. This translates into $19.1-44.5 million in lost state taxes, about 0.2-0.5 percent of the total. The lost state taxes comprise $8.3-19.3 million in income tax, $3.5-8.2 million in sales tax, and $7.3-17.0 million in other taxes. In addition, the state is expected to spend $80-100 million on cleanup and so for 2011 the tornadoes will cost the state $99.1-144.5 million. Local sales tax collections will also fall by $4.4-10.2 million in addition to whatever local governments have to spend on cleanup.

A fixed-asset basis is used to estimate the effect on Alabama GDP with the assumption that the state has the same GDP to fixed assets ratio of 29.2 percent as does the nation. Newspapers have reported a range of $2.6-4.2 billion expected insurance claims based on early estimates by Risk Management Solutions and AIR Worldwide. Assuming that the claims cover fixed assets only and allowing 10 percent extra for uninsured losses results in total estimated lost assets of $2.9-4.6 billion and a tornado-related 2011 Alabama GDP loss of $835 million to $1.3 billion or 0.5-0.7 percent.

The economic damage impacts are only a part of the full tornado damage impacts. There are other adverse effects on quality of life that we do not consider because these are non-market or non-economic effects. Examples include lives lost, displacement, mental and physical health issues, and the disruption to the lives of people who were not direct victims. Such quality of life aspects cannot be expressed with the variables used for impact analysis. In short, the damage impacts reported here are conservative.

Clearly the economic impacts of recovery activities are larger than those of the tornado damages. Some of the jobs created by recovery activities might go to people who became unemployed as a result of the tornadoes. It is important to note that the net effect is positive because most of the recovery funds are from external sources—the federal government and insurance claims. Those funds would have gone to some other use if the tornadoes had not struck or caused the devastation. As such, from a national perspective, the combined impact is negative. Additionally, there are the previously mentioned adverse effects on quality of life that if considered and valued could point to a net negative impact. If instead of rebuilding, the opportunity is taken to reinvest the net effect over time could turn positive. A specific example is just replacing a destroyed apartment building with (i) what was preexisting or (ii) something ranging from a larger (more units) and more energy efficient building to a totally different but better use of the space. The second choice is what will facilitate long term positive impacts.

Over the two years, recovery activities will generate enough revenue to cover damage-induced losses to state finances as well as the state spending for cleanup if assumptions on losses and spending hold. While the tornadoes’ damages are largely localized, the economic impacts of the ensuing recovery activities will be more widespread. Some areas were so devastated that it is nearby communities that will benefit from the recovery spending. This report focuses only on the identified economic effects, and not on other very important quality of life factors such as lives lost, displacement, mental and physical health issues, and disruption to the lives of people who were not direct victims. Incorporating these other factors and the opportunity cost of recovery spending leads to the conclusion that the tornadoes could have had a net negative effect on the state; the effect nationally is definitely negative. Overcoming this negative effect will require going beyond rebuilding to reinventing and reinvesting. 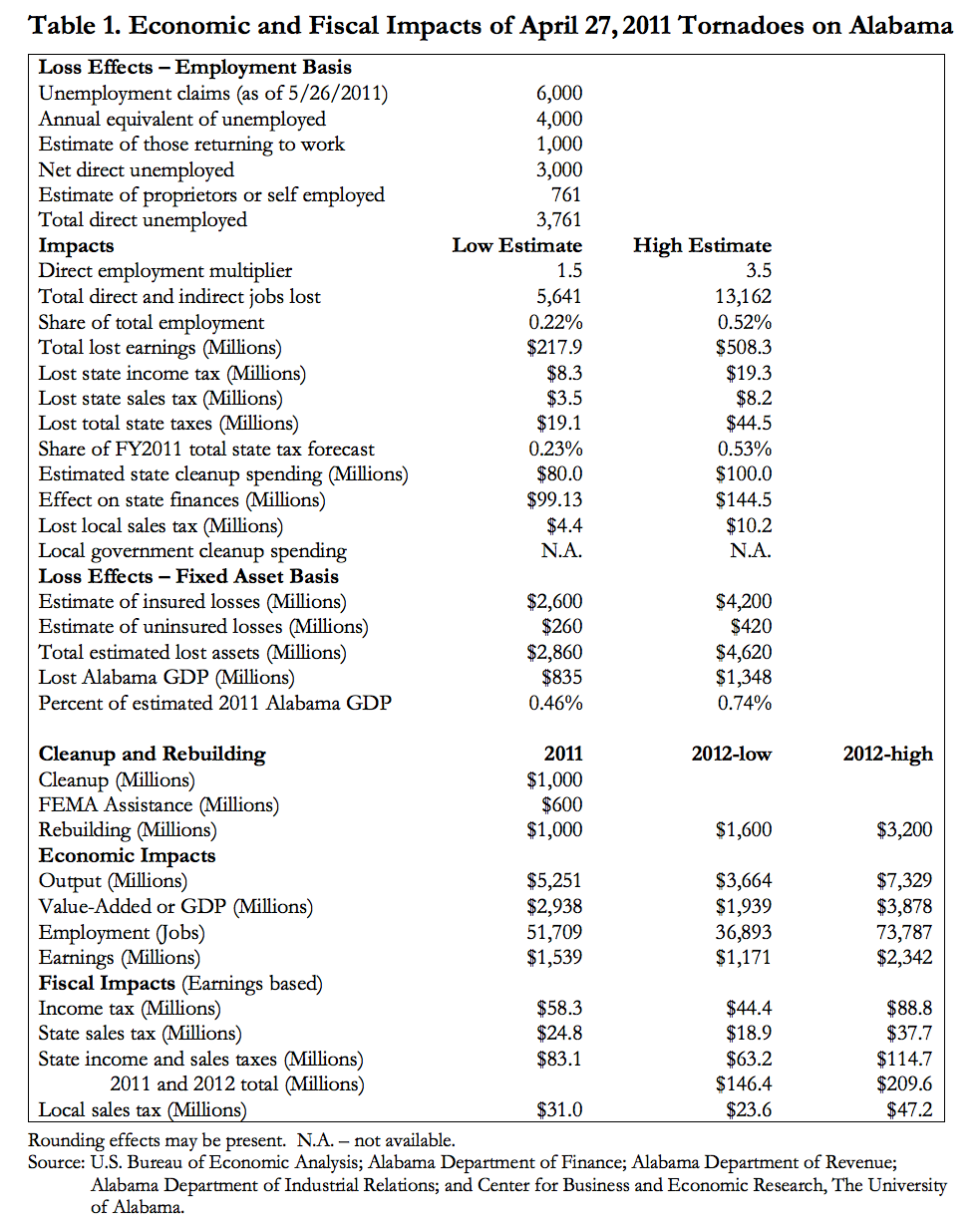