Business confidence registered at 61.6 in the third quarter 2017 Alabama Business Confidence Index TM (ABCI) survey conducted by the Center for Business and Economic Research at the University of Alabama’s Culverhouse College of Commerce.

The ABCI is compiled from a quarterly survey sent to business leaders throughout the state gauging their expectations for the coming quarter compared with the current. The six component indexes that make up the ABCI reflect panelists’ expectations for industry sales, profits, hiring, and capital expenditures as well as their forecasts for the statewide and national economies. An index value above 50 indicates a positive outlook, and the higher the index, the more confident the economic outlook. 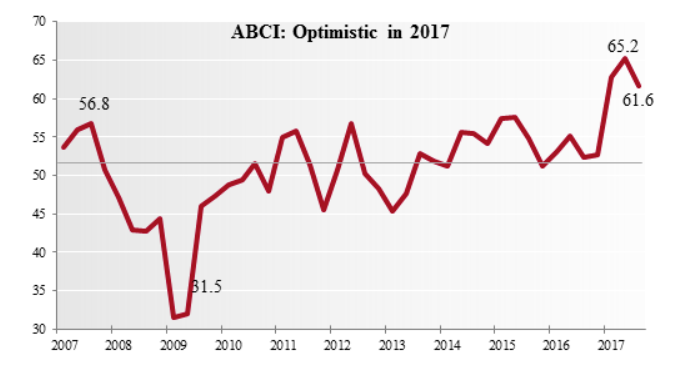 In the third quarter 2017 survey, the ABCI decreased 3.6 points from Q2 2017’s ten-year high to reach 61.6. This is the third consecutive quarter that the ABCI has registered levels above 60, while the average for the last five years is 54.3. This suggests expectations for economic growth have been increasing significantly since the first quarter of 2017, and though the actual index value has decreased this quarter, many business leaders expect continued growth in the third quarter of 2017.

In general, Alabama business leaders are continuing to forecast a strong Alabama Economic Outlook, with the index only losing 3.4 points to remain high at 64.2 this quarter. In Q2 2017, the Alabama economy index reached a ten-year high of 67.6, and in this quarter, 59.6 percent of business leaders throughout the state expect even better statewide economic conditions compared to Q2 2017. Exactly one third expect conditions to remain the same in the coming quarter, and only 7.0 percent expect worse conditions than were seen in the previous quarter. The Alabama Economic Outlook decreased slightly in the four metro areas but remained very confident with the lowest index value in Birmingham-Hoover registering 61.5 and the highest confidence for statewide economic growth compared to the previous quarter occurring in Montgomery with an index of 65.5.

In the Q3 2017 survey, all but one of the industry ABCIs registered above 50, indicating overall expectations for growth in the coming quarter. Many of the industry ABCIs were very high last quarter, so most ABCI values decreased from the previous quarter’s levels but remained positive. Five of the nine industry categories had ABCIs above 60, showing high levels of confidence for the third quarter of 2017, and only retail trade had an ABCI below 50. Manufacturing had the highest ABCI with an index of 68.1 after only decreasing 0.1 points from its Q2 2017’s ABCI. Panelists in manufacturing led in confidence in with the highest values in all component indexes, indicating high expectations for continued industry growth moving into the third quarter. Business confidence in retail trade fell 9.5 points this quarter, making it the lowest industry ABCI at 46.5. Panelists in retail trade expect a slowdown in hiring, profits and sales compared to the second quarter’s levels of growth.

Business leaders in Alabama’s four largest metro areas continue to respond optimistically, with all metros forecasting growth in the third quarter of 2017. ABCI Montgomery and ABCI Huntsville show the strongest confidence with overall index scores above 62, and ABCI Mobile was not far behind with an index reading of 61.9. Even the lowest metro ABCI, which was recorded in Birmingham-Hoover, remained high at 59.1 this quarter.

Alabama firms expect growth to continue with moderately strong confidence moving into the third quarter of 2017. All three size categories had ABCIs between 60 and 65 and optimistic forecasts for national and statewide economic growth. For the second consecutive quarter, mid-sized firms, those with 20 to 99 employees, have the highest ABCI at 64.8 even after a 1.9-point decrease from the previous quarter’s index. Mid-sized businesses have the highest levels of confidence in all four component indexes: sales at 67.7, hiring at 64.6, profits at 64.1, and capital expenditure at 62.0. Small firms have high confidence in increased sales compared to Q2 2017, and large firms expect sales and capital expenditures to grow with moderately high confidence in the coming quarter.